Shannon James, 25, works as a grounds person for trainer Andrew Balding, and has battled with mental health issues since the age of 16. 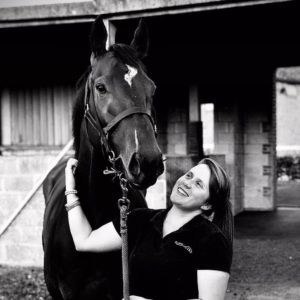 Shannon (pictured) was diagnosed with depression but weekly counselling sessions funded by Racing Welfare have had life-changing effects on her and now she has the confidence to tackle life head-on.

“I had a tough upbringing and I’ve had to face individual battles along the way, I was diagnosed with depression when I was 16 so it has been a long journey,” she says.

“I couldn’t hold myself together at work, I was a mess all the time, I was always very low and I would break easily over ridiculous things and it just got worse and worse.”

An accident at work over a year ago led to Shannon facing physical health issues which in turn, had a detrimental effect on her mental health. She began to struggle at work and constantly felt down. Anna Lisa Balding, wife of Andrew, suggested she contact Racing Welfare for support.

Along with Welfare Officer, Brian, it was decided the best route to take would be for Shannon to access counselling which was arranged within weeks. Shannon met with her counsellor once a week for several months.

Having bottled up her feelings for years, Shannon was initially afraid to reach out for help. She found it difficult talking to people she didn’t know about her problems and feelings which is why she had never seen a counsellor previously:

“The first few sessions were quite daunting but once my relationship with my counsellor was formed and I was more confident talking, it really took the weight off my shoulders and I felt much better.

“It’s crazy what happens when you open up, it was a process – seeing my counsellor and then I started medication as well – the mixture of the two levelled it out and I began to feel like a different person on a daily basis.

“It has 100 percent changed my life, I’m a whole new person, I have never felt so confident in all my life, I can face problems head on and if I feel like I’m struggling I can go and speak to my boss, my mum or anyone rather than bottling it up and exploding.”

Having completed her counselling, Shannon is feeling optimistic about her future and it is evident the positive impact it has had on her life:

“It was quite scary finishing counselling because it was like a security blanket but I had obviously spoken so much through the sessions, I felt like I didn’t need it anymore. It was always said that support would be there from Racing Welfare again if I needed it.

“I’ve had conversations with friends who are in racing who have felt like they can come to me and I’ve told them to contact Racing Welfare because they did so much for me. I say ‘They’ve done it for me so I’m sure they can do it for you.’”

“I’ve had conversations with friends who are in racing who have felt like they can come to me and I’ve told them to contact Racing Welfare because they did so much for me. I say ‘They’ve done it for me so I’m sure they can do it for you.’”

If you are struggling with depression or mental health issues, you can call us on 0800 6300 443 or you can read more on counselling here.